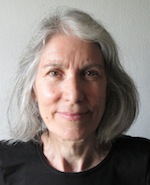 Deedee Cuddihy is a journalist who was born and brought up in New York but has lived in Glasgow since the "Big Storm" of 1967 (which she slept through). Or was it 1968? After finishing art school in Glasgow, she realised being an artist would be too difficult - and being an art teacher would be even more difficult. So she became a journalist and has been one ever since.

Her next book will probably be "Scottish Women"!

She is married to a Scottish man and has two grown up children - plus three granddaughters.