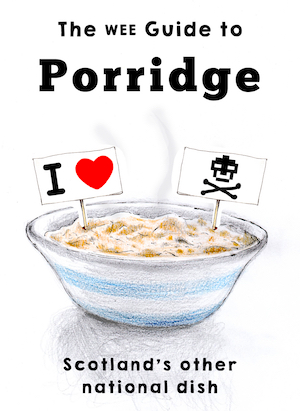 THE WEE GUIDE TO PORRIDGE

"Everyone has a story about porridge" declared the owner of a trendy porridge cafe in London during a recent radio programme about Scotland's other national dish. It's a state of affairs that would have annoyed the 18th century porridge hater, Dr. Samuel Johnson, no end. But as writer Deedee Cuddihy discovered, everyone really does have a story about porridge and there are more than 100 of them in "The Wee Guide to Porridge", the latest in the Funny Scottish Books series.

As well as first-hand anecdotes from a wide variety of people, there are bite-sized porridge stories from the internet and other media and even a newly created recipe for porridge - using Scotland's other national drink.